The Louise Vitry house was built in 1855 for Free Woman of Color, Louise Arsene Vitry by her consort, Achille Barthelmy Courcelle, a white New Orleanian.  Louise Vitry  (1818? – 1867) was born in Louisiana to parents who came to New Orleans fleeing the Haitian Slave Revolts of the 1790’s.  Mr. Courcelle was an early New Orleans builder who worked with the famous Louisiana Architect, Henry Howard on such houses as 926 Esplanade.  There are many details in the 926 Esplanade House that are similar to the Louise Vitry House including the ironwork, staircase, and triple-paneled window casings.

In 1857, there was a bank panic, and Courcelle, who was heavily in debt, sued Louise Arsene Vitry for possession of the house.  In 1858, Courcelle won his case but Louise Arsene  appealed to the Louisiana State Supreme Court, which subsequently ruled in her favor.  The Supreme Court document, hand written in both French and English, is over 200 pages in length and had a “Notarial Archives” type drawing attached to it showing how the house looked at the time.  This drawing has disappeared from the archive in the last 30 years.

The original lot of the house spanned an entire block in depth from Dumaine Street to St. Phillip Street.  It is also noted in the Supreme Court Case that Louise Vitry was allowed to keep their 7 slaves.  Louise apparently left the city of New Orleans sometime during or soon after the civil war and died in Brooklyn, NY in 1868.  The carte-de-visite images that we have of Louise Vitry and her grand daughter were taken in Brooklyn sometime between 1864-1868.

AN UPDATE:  Louise Vitry Courcelle’s 3 X grand daughter was gracious enough to hunt down and purchase the original cartes-de-visite of Louise and her grand daughter Celine and send them back to Maison Vitry.  It was a long roller coaster journey to get the photos back.  I  was very excited to hear the news and even more excited to receive the photos.  Upon opening the photos, I turned over Louise’s card and read the caption:  Mme Courcelle died on May 30,  1868.  It suddenly dawned on me that today was May 30, 2013.  The photos arrived here exactly 145 years to the day Louise died.  It was an emotional moment. 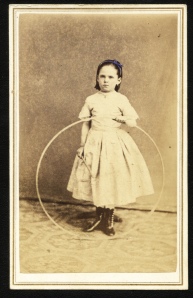 Back of Carte-de-Visite for Celine Claiborne

The house is an American Style side-hall town house with many original features including it’s original painted plaster frescos, mahogany staircase, ceiling medallion and some surviving marbleizing and wood graining.  It is interesting to note that this very Creole family lived in a house that was the latest “American” style and not the more conservative Creole style.

When the house went up for sale in 1882, there was a full column newspaper description of the home, again written in both French and English.  It describes “An Elegant Family Dwelling” and all of the outbuildings which included a kitchen,  4 water cisterns, a green house, and a wine cellar.  It also described how the gardens were laid out and the plant material it contained.  The inside of the house is outlined in detail and had 2 indoor bathrooms.